On 25 February it will be 80 years since the February Strike took place in Amsterdam.

On that day in 1941, tens of thousands of Amsterdam workers left their work in protest against the many anti-Jewish measures and the persecution of the Jews; a few days earlier, about 400 Jewish men had been arrested by the German occupier during raids in the Jewish neighborhood of Amsterdam. The February strike was the first large-scale resistance action against the German occupier in Europe, which crushed the protest with a heavy hand. Since 1946, the strike has been commemorated annually on February 25 at the Jonas Daniël Meijerplein in Amsterdam, by the statue of Mari Andriessen, "De Dokwerker”, The Dock Worker".

This year, due to the corona crisis, the commemoration cannot take place in the usual form at De Dokwerker. To contribute to the online commemoration of this historic act of resistance, the IISH made this story and image series about the February strike. The images shown come from the collections of the IISH, which preserves a lot of archive material about the February strike. 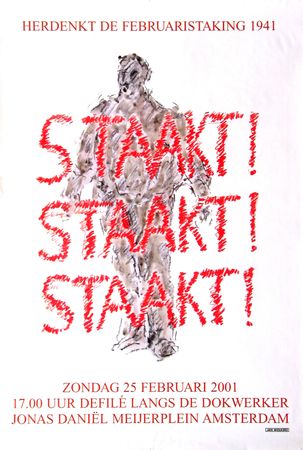