Today marks the passing of 100 years since the murders of Rosa Luxemburg (1871-1919) and Karl Liebknecht (1871-1919). Luxemburg and Liebknecht were killed in the middle of the Spartacist uprising, a series of strikes and demonstrations that began on 4 January 1919, when the Independent Socialist Emil Eichhorn was dismissed as Police Chief of Berlin. Luxemburg and Liebknecht were the main leaders of the uprising and therefore prime targets for the paramilitary Freikorps units. The provisional government, led by social-democrat Friedrich Ebert, had ordered these units to put down the uprising.

Prior to their deaths, both Luxemburg and Liebknecht had been important figures in the German socialist movement. Liebknecht was the son of Wilhelm Liebknecht, the co-founder of the German social-democratic party (SPD) and had been working as a defence attorney for party members, while also being an active member of several international socialist organizations and a member of parliament for the SPD.

Although Luxemburg did not have a family history of party membership like Liebknecht, she was active in socialist organizations from the age of fifteen: first in Russian-controlled Poland, where she was born, later in Switzerland and finally in Germany, where she moved to in 1898. Luxemburg became an active member of the SPD and a strong critic of the party’s parliamentary course, proposing a revolutionary way to power instead. She contributed many important works to Marxist theory, such as The Accumulation of Capital on economics and Dialectic of Spontaneity and Organization on political philosophy.

In 1914, at the advent of the First World War, the matter of supporting the war heavily divided the German socialists. The majority of the SPD supported the war, while those against it formed the Independent Social Democratic Party (USPD). Luxemburg and Liebknecht, as strong advocates for international solidarity among workers, founded the Spartakus League, together with some other German socialists, to protest the war and spread antimilitarist pamphlets.

With Germany’s defeat in the war becoming inevitable after the summer of 1918, unrest spread throughout the country. Starting with a sailors’ mutiny in the northern port city of Kiel in the last days of October, the revolution had soon reached all major German cities, where worker- and soldier councils began to take control of local government. The social democrats, led by Ebert, managed to gain control of the national government and tried to consolidate power. Soldiers were returning home, food was in short supply and the political unrest led to riots and brawls in the streets. Germany was in turmoil.

Driven by the experience of the start of the war, the Independent Socialists and the Spartacists did not trust the social democrats and decided to form their own, more radical party: the Communist Party of Germany (KPD). With revolution and social change in the air, thanks to the end of the war and abdication of the emperor, they saw an opportunity for their own revolution. The Spartacist uprising was initially very successful, with mass strikes and demonstrations in the streets of Berlin. Since the military structures had collapsed, the Ebert government asked the paramilitary Freikorps units, mostly composed of war veterans, to put down the uprising.

This resulted in mass violence on the streets and, ultimately, the capture and murder of Luxemburg and Liebknecht. The outcome of the Spartacist uprising would continue to divide the German left during the Weimar Republic, with the communists feeling betrayed by the social democrats. The social democrats, in turn, felt threatened by the possibility of a new communist uprising. Luxemburg and Liebknecht would remain important martyrs and icons of the German communist movement and, to this day, their deaths are commemorated every year.

At the IISH, the papers of Rosa Luxemburg and Karl Liebknecht are made available. 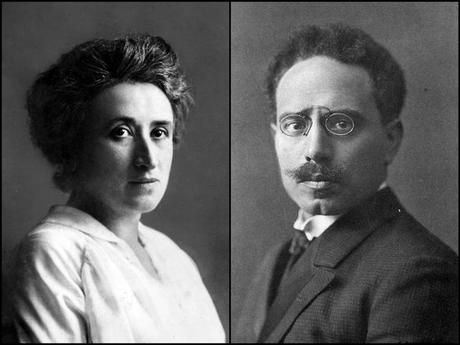