On July 13, 2020, the IISH acquired the Core Trust Seal (CTS). This internationally recognized certificate means that the IISH can now call itself a reliable and sustainable repository for digital materials.

In other words, the IISH has now acquired the status of a so-called Trusted Digital Repository (TDR). Given the considerable effort taken to obtain the CTS, this is reason for some pride and joy and an important milestone in achieving ‘digital maturity’. The following blog explains a little about the motivations behind acquiring the CTS, the certification process, its value and relevancy and the next steps.

Why get a certification?

The IISH has wanted to acquire a Core Trust Seal (formerly Data Seal of Approval) for some time now, this was motivated by a range of different factors. To begin with, there was strong support for a KNAW (Royal Netherlands Academy of Arts and Sciences) institute and a partner within the  KNAW Humanities Cluster to have a certified, reliable and sustainable digital repository. Also taking into account the praise for the unique (digital) collections and research data at the IISH in the last KNAW portfolio evaluation (2019), it was a logical and strategic policy choice for the IISH to secure the certification of a trusted digital repository. Obtaining the CTS was also valuable for the IISH in its role in the 'hub' of the Dutch Digital Heritage Netwerk (NDE), as it provides an example for other NDE partners also looking to apply for certification.

Perhaps an even more important driving factor behind the desire to obtain a CTS, was to be able to show potential, and existing, archival donors that their archives can be stored safely and sustainably at the IISH. There are often extra barriers that have to be overcome for donors to transfer digital material to a third party: the CTS can be that additional needed reassurance to be able to actually take that step.

A final and more internally focused reason for certification was the almost complete overhaul of the digital infrastructure at the IISH for archiving and making the digital collections available. From 2017 till 2020 work was done on a new storage system, the implementation of Archivematica ('OAIS-compliant' digital archiving software), the development and implementation of a Workflow Controller (custom pre-ingest workflow software), the development and implementation of a new IIIF viewer for digital content (now available for digitized material, later also for digitally born material) and the migration of all digital material from the old depot and storage system to the new repository (via Archivematica and following a new preservation policy). This significant and ambitious step forward was one of the main drivers behind work on the certification.

Preparations were made from early 2017 through to summer 2019 for the certification process, in practice this meant (and more or less in this order):

Finally, a first version was submitted to the CTS organization in July 2019. After two intensive review rounds (which consisted of supplementing and adjusting the texts in the application and adding additional documentation), it was announced in June 2020 that the IISH had acquired the CTS and after a final textual improvement round, the certificate was formally awarded on 13 July. Thus, the formal process of acquiring the CTS took just over a year.

Critically considering how we approached certification, it might have been more helpful retrospectively if we had concentrated on the CTS during a short period of intense work. Instead, the application was worked on intermittently over a relatively long period of time, which did not always benefit the efficiency surrounding the application. Furthermore, during this time a lot of hard work also went into the aforementioned renewal of the digital infrastructure and the CTS application was sometimes just a bit lower on the priority scale. On the other hand, this overhaul provided new input for the application and also made it stronger, so in the end, although it did indeed take a while, maybe that was for the better.

Another point about our certification process, is that we provided a fairly comprehensive response to all criteria - more than can be read in most other applications. The disadvantage of this was that the reviewers then had a lot more feedback for us that we needed to work harder to respond to. On the other hand, this feedback resulted in more food for thought and sharper conclusions on our part. For example, in two particular cases we had been too careful and modest in assigning a lower compliance level (“3 - The repository is in the implementation phase ”) instead of the highest compliance level (“4 - The guideline has been fully implemented in the repository”). The feedback we received was that the reviewer (rightly) wondered what else it takes to get to level 4 when so much had already been done. The choice was then to raise the level to 4 or to provide additional arguments as to why it remained better at 3. A wise lesson for the 2023 CTS application.

In terms of staffing, a relatively small group of people worked on the CTS application, but the documentation does come from a wide group of IISH and Humanities Cluster Digital Infrastructure (DI) employees. The latter group, from their role as administrators and developers of the digital infrastructure, made an indispensable contribution to the acquisition of the CTS.

In addition to the CTS being a promotional asset, the IISH has also benefited from the certification process itself. Much more thought has gone into why we do things as we do, and the process resulted in a lot of new valuable documentation. We now know better than before where we still have weaknesses and where we still have work to do.

Now that the IISH has acquired the CTS, in addition to a festive reflection on this joyous fact, there is neither space nor time for resting on our laurels. At the moment of writing, work is still being done on many parts of the infrastructure and starting to use these often creates new challenges that must be solved. The future vision and policies regarding digital archiving and research at the IISH are certainly not done and set in stone. Looking at the bigger picture, the IISH is still in the middle of a 'digital transformation' that will entail even more change in terms of technology and staffing. It is important that the organization remains flexible enough to adapt to new insights and techniques that determine the hectic pace of a still increasingly digital world. In this sense, the CTS is a snapshot of where the IISH stands in 2020. In 2023, we will have to re-apply for the CTS and go through the whole process again. Hopefully, in 2023, the CTS application will contain many new elements and reflect the dynamics of a changing and flexible organization.

On the IISH Confluence CTS site: 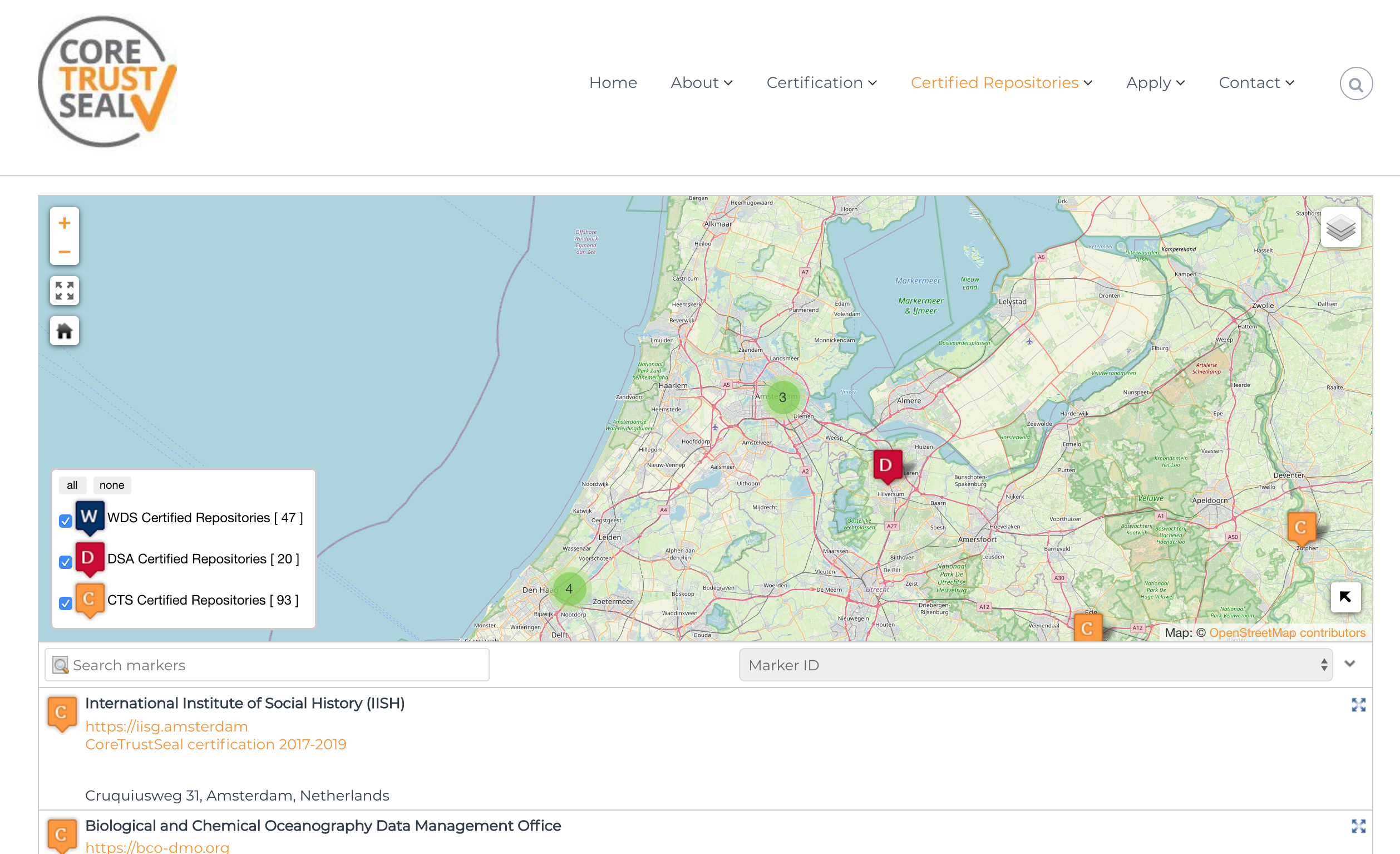