New posters from Iran about the 1946 crisis

NB: a version of this text in Farsi is downloadable as pdf below!

One of the early events that mark the beginning of the Cold War played out in the northwestern province of Iran, Azerbaijan, widely referred to as the 1946 crisis. A number of recently acquired posters in the collection of the International Institute of Social History (IISH) provide a colorful image of the way in which the 1946 crisis was perceived and propagated by the Iranian state in the following decade in the context of the Cold War.

The immediate roots of the 1946 crisis lie in the Anglo-Soviet invasion of Iran during the Second World War. In a surprise attack, the British navy opened fire on 25 August 1941 on the Iranian sloop Palang in the port of Abadan. British troops then occupied the province Khuzestan to secure its oil resources that were under the control of the Anglo-Iranian Oil Company, and moved into central Iran. At the same time, Soviet troops invaded the northwestern provinces of Azerbaijan and Gilan and moved towards the capital Tehran, while Soviet troops also made incursions into the northeastern part of Iran.

The Anglo-Soviet invasion had a number of goals: open supply lines to the Soviet Union, secure Iran’s oil, and depose Reza Shah as he had sympathized with Germany in his attempt to counter British power. Having replaced his father, Mohammad Reza Pahlavi signed the Tripartite Treaty of Alliance with Britain and the Soviet Union in January 1942. According to this treaty, the occupying forces were obliged to leave Iran not more than six months after the end of the war.

The 1946 crisis followed the refusal of the Soviet troops to leave northern Iran. Having expanded their influence in this region and taking advantage of the nationalist demands in Azerbaijzan, the Soviet Union directed and assisted the establishment of the Azerbaijan Democratic Party led by Jafar Pishevari, which in November 1946 launched the autonomous Azerbaijan People’s Government. Similar events unfolded in Iranian Kurdistan.

With this move, Soviet leader Joseph Stalin aimed to gain a permanent foothold in Iran to balance British, and increasingly American, influence in Tehran. He also used it to pressure the central government to give oil concessions to Soviet Union in northern Iran, similar to the ones it had given to the British four decades years earlier.

Iran, with support of the US, protested against the Soviet occupation of its province and took the matter to the United Nations Security Council, which issued a resolution demanding the withdrawal of Soviet troops. After the Soviet troops left Iran in April 1946, the Shah sent his troops to destroy the autonomous governments in Azerbaijan and Kurdistan.

Four of the posters in this collection were produced in the mid-1950s to mark 12 December 1946 (21 Azar 1325 according to the Iranian calendar) – the day the army under command of the Shah defeated the autonomous governments. Two of the posters reflect the consolidation of the Shah’s power a decade after the 1946 crisis, and celebrate his birthday as he has brought “democracy”, “security”, and “glory” for the “nation”.

These posters were collected by Charles Richard Schroeder (1911-2011), who worked at the refinery at Abadan from February 1958 to February 1960, and donated to the International Institute of Social History by his son Paul Charles Schroeder (1946 - ).

Links to the posters in our catalogue: 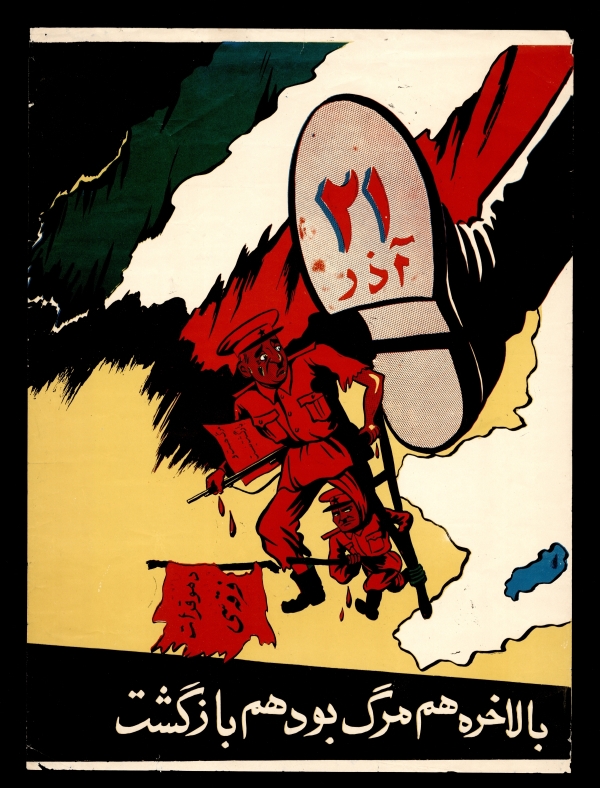