'Enslaved in Dzungaria: what an eighteenth-century crocheting instructor can teach us about
overland globalisation'

Abstract: It is easy to like exciting life stories, and to follow individuals as they cross vast areas and are confronted with experiences they never expected, and carve out new lives for themselves. When these people are women, these are sometimes labelled ’strong’. What does this word actually mean, and to what degree is it – or should be – consciously gendered? To what degree does this word assume agency, perhaps even a measure of freedom? This talk will use a micro-global case story to pose question of exceptionality and representativity, and of how unfree people such as prisoners of war fit and add to current debates of global history.
This global micro-historical analysis of the Swede Brigitta Scherzenfeldt’s capture in Russia and her subsequent enslavement in the Dzungar khanate stresses actors and regions that are needed to nuance the history of globalisation. The early globalisation process is commonly exemplified with maritime contacts, involving free and often male Western European actors. In contrast, this study combines multi-lingual source material to trace economic integration, cross-border trade, the circulation of knowledge, literary depictions, and diplomatic contacts in the Central Asians borderlands between China and Russia. In the process, the importance of including female, coerced actors, overland connections and non-European empires in the history of early modern globalization becomes clear.

Bio: Dr. Lisa Hellman is Researcher and Coordinator of Research Group "Coerced Circulation of Knowledge" at the Bonn Center for Dependency and Slavery Studies. She works in the intersection between social, cultural, maritime and global history, with a special interest in gender. In the last years, her research has led her to pay increased attention to diplomatic history and the history of science.
Her first project focused on everyday life of Europeans in the ports of Canton and Macau. In her second project, she compared their experiences with those in other Asian ports, primarily Nagasaki. In her current project, she follows 18th century prisoners of war in Siberia and North Asia.Consequently, her research spans from the 17th to the early 19th century, with a regional focus on early modern Central and East Asia. The core question driving her, is how intercultural interaction changed the lives of the men and women involved.

IISH Seminar: This lecture is part of the monthly IISH Seminar series. This seminar is open to the public online only. 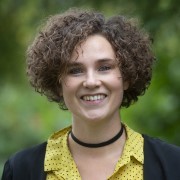