The Netherlands is one of the few countries in the world that has kept a continuous population register starting as early as the mid-19th century. In the early registers each household was entered on a double page, with the head of the household first; he was followed by his wife, children, other relatives, and other members of the household.

Population registers remained in use until 1910 or 1920, after which a new form of continuous registration was introduced, consisting of single sheets, so-called family cards. The registration unit was no longer the household but the family.

At the time of death, this card is removed from the files and sent to the Central Bureau of Statistics (CBS), where the data on the card are used for statistical purposes; and then it is sent to the Central Genealogical Bureau (CBG). Copies of the cards are made available to the public, albeit without information that might infringe on privacy.

Publicly released copies of personal cards have been used for the data set. They contain the following information: name, municipality and date of birth of the person concerned, as well as those of his or her parents, marriage partner(s) and children. The nationality is given as 'Dutch' or 'Foreign'. Successive occupations, addresses and changes therein are also indicated. 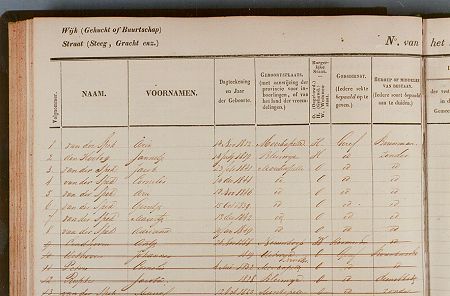