The HSN started around 1987 with the formation of a work group whose members were from different social science disciplines like sociology, social-economic history, social geography, economics and demography, all sharing relatively strong historical interest.

The members of this group came from several Dutch universities.

In 1989 this group was formally structured as a foundation with independent legal status. The new foundation set up an agreement with the International Institute of Social History (IISH) in Amsterdam, to house the foundation office and support it as far as the Institute could.

This development encouraged the Ministry of Education & Research to give financial support for a pilot project. The province of Utrecht was selected because of its central position and because it has an appropriate number of births for this pilot project, about 5% of the total of Dutch births between 1812 and 1920. Moreover, it is a region which is, in such aspects as religion, probably the most representative of the Netherlands as a whole.

The data from the Utrecht trial project were made available to the scientific community via HSN data release 94.0. This release can be seen as a prototype for data release UT.03, which was released in 1998. The data of HSN data release 94.0 have already been used for research, the results of which can be found in: K. Mandemakers and O. Boonstra, De levensloop van de Utrechtse bevolking (Assen 1995).

Since then a subsidy of the Dutch foundation of scientific research (NWO) has enabled the HSN to extend the original sample to cover the whole of The Netherlands. 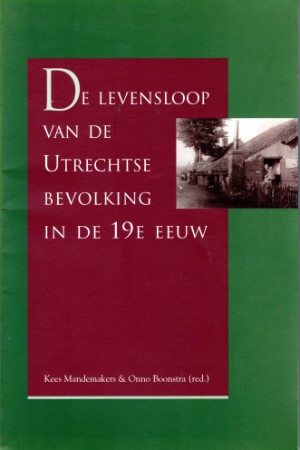