In 2019 fifty years after the first issue of Suck, the complete archive of the Bill Levy Collection will be accessible at the IISH.

“Suck was sexual revolution, wasn’t it? No, no, no, Suck was a magazine of art and literature with sex as its theme.” Anyway, the IISH staff was very keen on collecting material created by Bill Levy and in October 1974 a first transfer to the Institute was made. Finally in the summer of 2018 Susan Janssen and Bill Levy hand over all the remaining archival material of Suck, The Wet Dreams Film Festivals, and The Virgin Sperm Dancer. In 2019 fifty years after the first issue of Suck, the complete archive will be accessible. 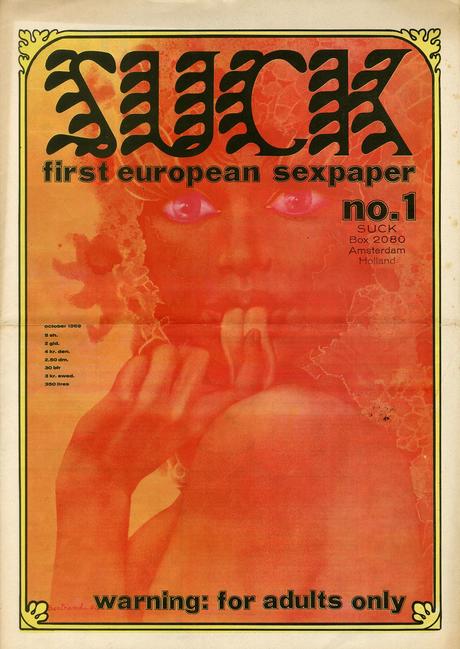 The SUCK STORY by Bill Levy

In the summer of 1969, in London, William “Bill” Levy (editor-in-chief of International Times), Heathcote Williams (playwright),  Jean Shrimpton (supermodel and muse), Jim Haynes (founder of the Traverse Theatre in Edinburgh and The Arts Laboratory in London), and Germaine Greer (feminist writer) decided to create a new radical sex publication. Willem de Ridder (Aloha, Amsterdam) is contacted to cooperate on design and production. Jim does some Public Relations and gets a large gift. Bill and Heathcote jump on a plane to Amsterdam and in ten crazed days the debut issue is made of SUCK (the first European Sexpaper) together with Willem.

The first issue is a sensation. Especially in England. Scotland Yard immediately closes the English postbox address, raids the Arts Lab tapping walls, looking for secret printing presses. Of course, they don't find the one copy of SUCK in the building, appropriately stashed under Jim's pillow. Then, still looking, they fly to Amsterdam where a SUCK-team, on a tip, removes some 9000 copies stored at the printer (Augustin & Schoonman in Zwanenburg) an hour before the arrival of the British police. While Scotland Yard has tea and cake at our designer's studio, Bill arranges for 1000 SUCKs to be smuggled into England, to be given out free at a Living Theatre benefit at The Roundhouse.

Bill Levy is thrown out of England. Jim Haynes leaves London to accept a teaching position at the University of Paris (Vincennes). Germaine stays in London. Willem flies to Brussels to pick up dollars for the second issue. Bill starts living in Amsterdam, and Susan Janssen and Lynne Tillman join the Suck-family.

Bill Daley arrives from Los Angeles to take over the distribution and from that time on SUCK becomes a traveling sexpaper.  A legendary publication that is made in places like Paris, Frankfurt, Warder, Amsterdam, The Hague, California.

From all over the world people react strongly and plans are made for the Wet Dream Festival – the world’s first erotic film festival - so SUCK readers and contributors can meet each other. Fatima (Didi Wadidi) Igramhan, star of “Soft Girls”, joins the SUCK family as German editor.
With SUCK no.6 we take a new departure. Until then our publications are what some call 'utopian'. We look at ourselves and realize none of us live in a sexual utopia. From this time on we include our sexual confusions as well as our ecstasies, struggles as well as successes. SUCK turns words into flesh, flesh into words.

The second Wet Dream Film Festival in 1971 is a strong exciting experience for all the SUCK readers who come from all over the globe. During the winter of 1972-'73 the SUCK family angrily divides on many issues, real and imaginary. Germaine resigns. Everyone else resigns in sympathy. Internal contradictions have been there from the beginning. On one side, the reductionists who wanted everything about sex reduced to reflect what they called sexual revolution or sexual liberation. On the other side, less abstract, less didactic, that is those who wanted a publication about art, literature and life on the theme of sex. We agree to make one more issue of SUCK, then call it quits.

Some of the dramatis personae & their pseudonyms

Among the Dutch artists who published in Suck