Sometimes you stumble upon little surprises. In this case finding a poster in a small donated collection of Indonesia and East Timor related magazines of the Thailand Informations- und Solidaritätskomitee, München (TISK) on the events of 6 October 1976, which were commemorated in Thailand only weeks ago.

The poster came as a supplement to an issue of Ost-Timor Aktuell (1977), as can be seen in the right upper-corner. This could explain the finding place, but no indication of a particular issue of the magazine was found.

The title of the poster is Militärterror in Thailand. The illustration is taken from one of the iconic photos of the event. There’s also an image of a buffalo ploughing the fields and a farmer’s family. It is not exactly clear what that has to do with the issue at hand.

In the long German text it is explained what happened on that dreadful 6th October [1], before the military installed itself as the new government in the evening of the same day. The poster was published on the occasion of the ongoing trial against one of the student leaders, Sutham Saengpratum. The poster shows five demands regarding the Thai government and publishes the addresses of the King and PM Kraichivien to send solidarity letters to. Interestingly enough, the fifth demand listed in the poster is for Thailand to respect the UN declaration on Human Rights. Just this November there is the Universal Periodic Review for Thailand in Geneva, and that demand is still standing 45 years later.

For the later fate and career of Sutham, please read the fantastic book of Kanokrat Lertchoosakul, ‘The Rise of the Octobrists in Contemporary Thailand : Power and Conflict among Former Left-wing Student Activists in Thai Politics’ (Yale University Southeast Asia Studies, 2016).

TISK was also the publisher of Thailand Correspondenz which published around 10 issues between 1977 and 1984. I wasn’t able to locate any later issues.

[1] The 6 October 1976 massacre (in Thai shortened to: เหตุการณ์ 6 ตุลา), was a very violent crackdown in the morning of 6 October by Thai police, supported by right-wing paramilitary groups (Red Gaur) and bystanders targeting student protesters who had occupied Bangkok's Thammasat University and the adjacent Sanam Luang. Prior to the massacre, thousands of people had been holding ongoing demonstrations against the return to Thailand of former dictator Thanom Kittikachorn in mid-September. Official reports state that 46 were killed (both sides) and 167 were wounded, while unofficial reports state that more than 100 demonstrators were killed. 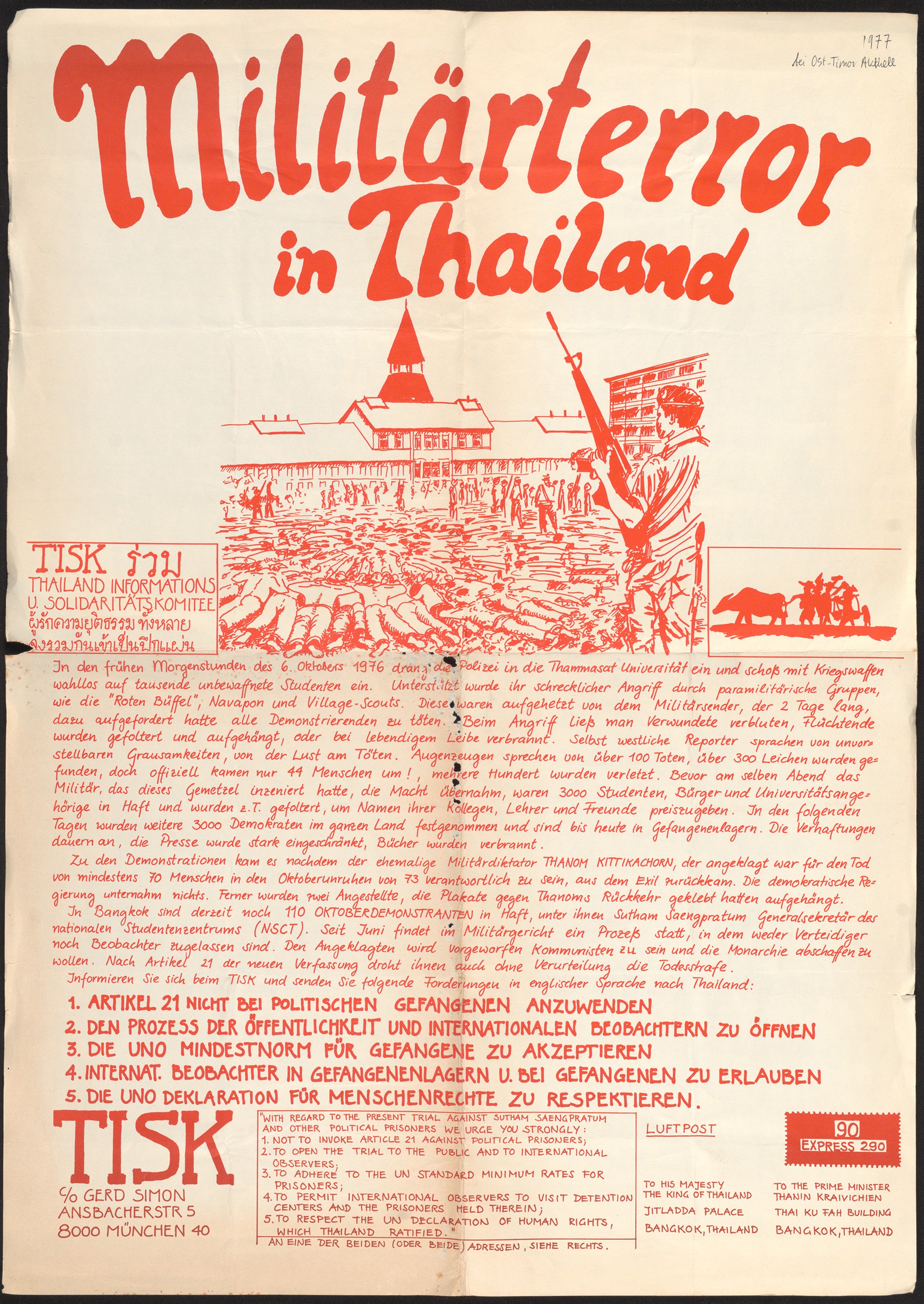