About a year ago the IISH bought a flag (banner) of the Indonesian Pemuda Rakyat at an auction. Due to the pandemic the processing of the flag in the catalogue of the IISH was put on hold, but now it is finally accessible (IISG BG L1/501). Pemuda Rakyat (People's Youth) was the youth wing of the Partai Kommunis Indonesia (Communist Party of Indonesia).

The organisation was first formed as Pemuda Sosialis Indonesia or Pesindo (Socialist Youth of Indonesia). Initially the organisation was an initiative of the Minister of Defence Amir Sjarifuddin. On 10 and 11 November 1945 a congress was held, where seven locally based youth chapters merged. Rapidly Pesindo gained around 25,000 members. The organisation took part in the armed struggle for independence against the Dutch colonial power during the Indonesian National Revolution from 1945 until 1949, when the Netherlands finally recognised Indonesian independence.

Pesindo also took part, along with PKI and Front Demokrasi Rakjat (People's Democratic Front - FDR), in the Madiun Affair in 1948. This was an armed conflict between the government of the self-proclaimed Republic of Indonesia and the left-wing opposition group FDR during the Indonesian Revolution. The conflict began on 18 September 1948 in Madiun, East Java, and ended three months later when most FDR leaders and members were detained and executed by Tentara Nasional Indonesia (Indonesian National Military).

Thus, Pesindo officially disappeared from the Indonesian political scene and was replaced with Pemuda Rakyat. In 1965, membership of Pemuda Rakyat reached around three million. However, the organization was officially banned when the government issued MPRS Decree Number 25 of 1966 concerning the Dissolution of the Indonesian Communist Party.

General manager Francisca Fanggidaej later ended up in the Netherlands and her archive landed at the IISH. See the link here: Francisca Fanggidaej Papers. There is also a very substantive interview in the In Search of Silenced Voices collection (items 55-78, almost 1000 minutes)

If we try to ‘read’ the symbols on the flag most of them are quite obvious. On top you see the Indonesian flag, in the centre the five pointed star. At the bottom part you find a cog which represents industry and a book that symbolises education. On the left and right part of the circle cotton and rice. These last two are also used for the fifth precept of Pancasila - the ideology and foundation of the Indonesian state - namely 'Social justice for all Indonesian people'. 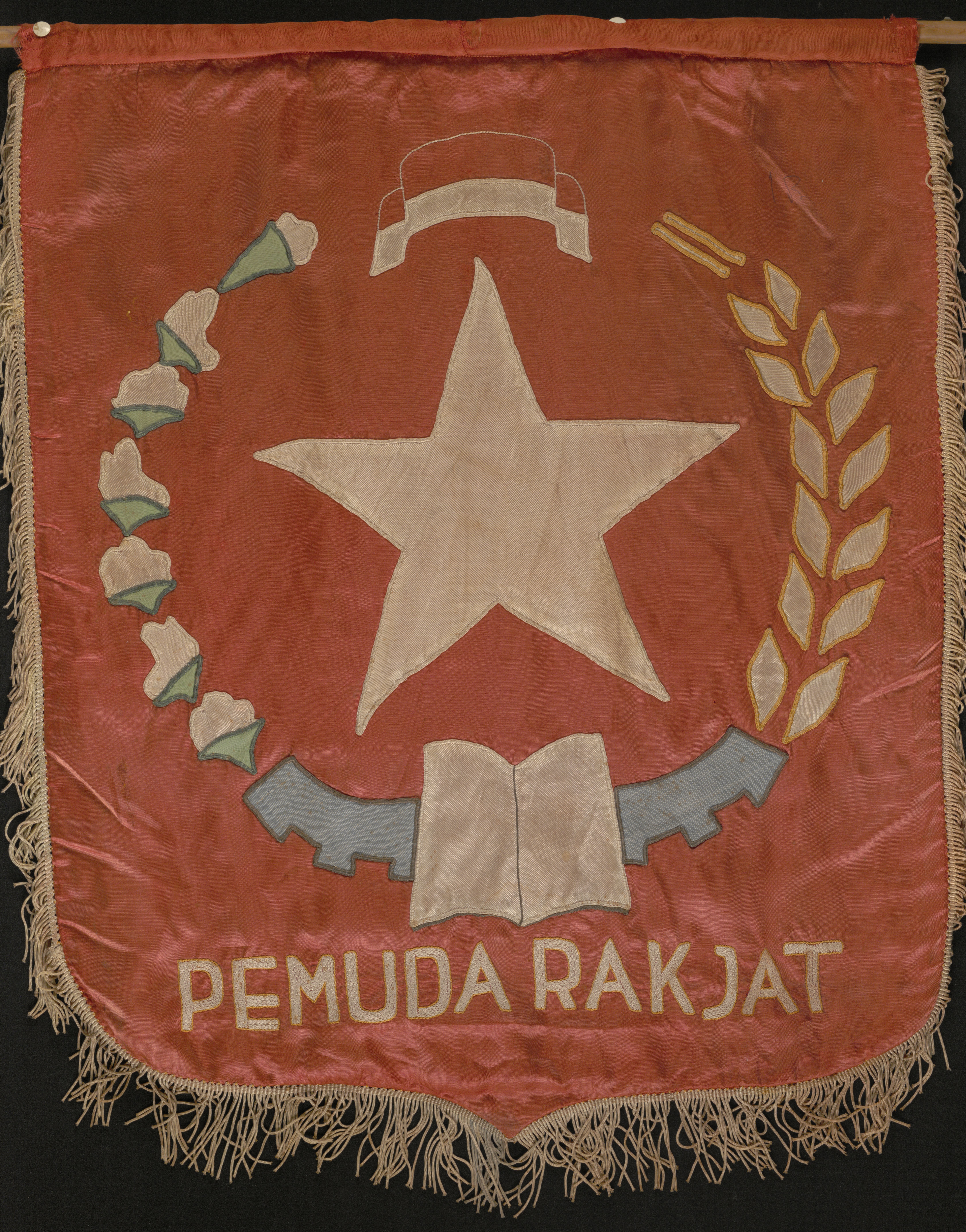