Promoting the urge for freedom: 85 years at the IISH

Picking a date to celebrate your anniversary can be somewhat arbitrary for an organization.

Should it be the date the idea to establish the organization was conceived? The date of an official act? The official opening? Welcoming the first customer who made use of your services? Each of these options has merit. For the IISH, a date could be chosen somewhere between developing the idea and the official opening of the institution. But neither of these reveals when it all began.

NEHA and Domela
Back in 1915 IISH founder N.W. Posthumus, acting as director of the NEHA at the time, asked Domela Nieuwenhuis whether he would like to entrust his personal papers to the NEHA. His and many other collections that are now characteristic of IISH collections were first entrusted to the NEHA. The NEHA even opened a ‘social-history section.’ In 1932 Annie Adama van Scheltema-Kleefstra became the librarian here, a position she took up at the IISH three years later.

Marx and Engels and more
During the months after Hitler’s rise to power on 30 January 1933, efforts were made to rescue the historical collections that the German social democratic party (the SPD) kept at a separate institution in Berlin (the Historical SPD Archive). These archives are now known to be among the most important cores of the IISH collection. Some of those who corresponded with each other throughout Europe about this were among the founders of the IISH. Russian socialist and historian Nikolaevskij may be the most important among them. Notable people from the SPD were Paul Hertz and Otto Wels someone like Friedrich Adler and from the Socialistische Arbeiders Internationale [Socialist Workers International].

In 1933 and 1934, Posthumus first turned to Dutch social democrats to sound out the Sopade, as the SPD in exile in Prague came to be known. On 16 December 1933, Wibaut wrote Hertz that the day before he had the opportunity to learn how Posthumus, to whose name he added ’(Genosse [= comrade])’just to be on the safe side, intended to set up their library as a section of the Economisch-Historische-Bibliotheek (EHB, Economic History Library). And that the archives would be handled entirely as directed by the Sopade. Filled with optimism, Wibaut wrote: ‘the shipment may be received any day now.’

1934: Concrete plans
In 1934, Posthumus and Annie Scheltema corresponded with the Sopade about two matters: first, borrowing manuscripts of Marx’s work for an exhibition in recognition of the 40th anniversary of the SDAP and second, the Historical SPD Archive. On 20 June 1934 Hertz wrote Posthumus that he had been informed about his interest in the SPD collections through a letter from Albarda, the SDAP party chairman in the Dutch House of Representatives at the time. Apparently the letter from Wibaut had not been sufficient. Still, this letter marked the start of direct contact that brought the plans of Posthumus to the verge of success in 1935. Only in 1938, however, did all this culminate in the acquisition of the Historical SPD Archive comprising the manuscripts of Marx and Engels.

Establishment: 25 November 1935
Another crucial date in 1934 was that of the meeting between Posthumus and De Centrale Director De Lieme on 3 October. In their brief conversation Posthumus described his plans and was informed of the outcome two weeks later: De Centrale was willing to spend money on his ambitious project to collect social history source materials and use them for research. De Lieme eagerly helped Posthumus in building his ideas and was decisive in bringing about a separate institution, rather than making it a section of the NEHA. This led the International Institute of Social History to be founded on 25 November 1935, which is the most concrete date of establishment (for the text of the deed of foundation, see Maria Hunink, De papieren van de revolutie: het Internationaal Instituut voor Sociale Geschiedenis, 1935-1947, pp. 185-190).

This is why the IISH is now celebrating its 85th anniversary. On the day of the establishment, Annie Scheltema wrote a note to De Lieme, congratulating him on setting up ‘a monument in this time of destitution, in which so much greatness is being lost but is then instantly rebuilt - a monument for the international labour movement’. And she continued that ‘this [is] now my life’s work’.

She was certainly not exaggerating. Besides these solemn statements, she wrote more prosaically about the new front door at 264 Keizersgracht, ‘a simple, solid door.’ One fortunate coincidence is that of that door, in any case of part of it, a photo remains, taken around the same time by Posthumus’s daughter, Th.W. Kruimel-Posthumus, who worked at the Institute as an administrator before the war.

Time for a statement of principle
In fact, the IISH was already fully operational on 25 November 1935. In these years of extreme expansion the staff were so inundated with duties that the official opening did not take place until 11 March 1937 (‘at 3 in the afternoon’). Still, this merits reflection as well. A great many dignitaries were invited to this official occasion, including the mayor of Amsterdam, the president of the KNAW [Royal Netherlands Academy of Arts and Sciences], the university trustees, SDAP MPs, government ministers, the management of De Centrale, the director of the KB [the Dutch National Library], individuals such as Henriëtte Roland-Holst and Frank van der Goes, etc. etc. The founders took the opportunity to deliver a mission statement, a statement of principle as to the raison d’être of the organization, its purpose, and why that is important. Posthumus did this in a speech of which we convey the draft here, including handwritten corrections.

Speech by Posthumus
Posthumus states that this institution is a true miracle, a rescue operation that came about in these turbulent times thanks to the willingness of De Centrale. The library already comprises 100,000 titles, and important international archives have been acquired. It is interesting that he lets collecting begin from the late Middle Ages but immediately points out the importance of current collecting of what is now known as ephemeral material. The Institute, he continues, will enable the new discipline of social history to come into its own. This discipline is not rigidly circumscribed. He provides a definition: ‘social history [comprises] the states and movements of the groups of a people, insofar as they have an economic foundation, as well as the spiritual forces controlling and driving these groups. In the process, the groups that are in dire economic straits require special, though not exclusive consideration.’ The IISH might conceivably be ‘established as a treasure chest of scholarship.’ The Institute can contribute in three still more important areas. The first is to enhance understanding of our own time. The second is that historiography is an evolving process; history is continuously rewritten. In the words of Posthumus: ‘All too rarely is it acknowledged that history varies for each generation. After all, how things came about in the past cannot be ascertained with absolute certainty.’  From an empiricist such as Posthumus, this statement is indeed remarkable! The third area is the most important. He asserts candidly that social history has the strongest bonds with the human quest for greater freedom. And ‘to promote … the urge for freedom that has characterized the history of humanity has been significant in the objectives of the founders.’ Posthumus concludes by saying that the action by De Centrale attests to ‘a deep awareness of contemporary needs but also reflects great optimism.’

Now, in 2020, we know that in 1937 the greatest need still lay ahead. Now that the IISH has achieved its 85th anniversary and is both a treasure chest of scholarship and a mainstay of socially relevant historical research, the great optimism of bygone days certainly proves justified.

Huub Sanders is a fellow at the IISH and following many years of dedicated service as a researcher published the book Het virus der betrokkenheid. Het Internationaal Instituut voor Sociale Geschiedenis, 1935-1989, based on his PhD thesis with the same title. 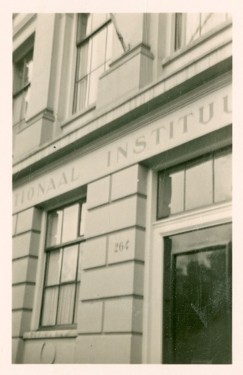