This section answers the following questions: when did a birth have to be reported; who could make the declaration; what data can be found on a birth certificate; and what about illegitimate children?

Who declared a birth
The declaration ought to be made by the father or, in his absence, by the midwife or someone else who was present at the delivery. When the mother gave birth outside her home, the declaration was made either by one of the aforementioned or by the principal occupier of the house in which the birth took place. In the certificate the name, occupation, place of residence, and age of the declarant are most often mentioned first.

Data on a birth certificate
The registrar asked the declarant for information on the day and hour of birth, the place within the municipality in which the child was born, and the sex and Christian name of the child. Items to be recorded for the parents included surnames and Christian names, occupation and municipality of residence. The names and marital status of the parents had to be registered in such a way that the legal status of the child was clear. Generally, the father of a newborn child made the declaration, which means that his age is known. Until 1935 a person who declared a newborn child to the registrar had to be accompanied by two witnesses, which means that their ages, addresses and occupations were recorded as well. The witnesses and the person who declared the birth were obliged to sign the certificate. In case they could or would not sign, the reason for this had to be made explicit.

Illegitimate children
Those children born outside legal marriage are illegitimate. Their mothers were generally unmarried, or their former marriage had ended at least 300 days before. Children resulting from adultery of a married woman were registered as legitimate, unless her husband had refused and had started a complicated procedure to dispute the child's legitimacy.

The birth certificates of illegitimate children differed in important respects from those of legitimate children. The registrar was not entitled to state the name of the father, unless the father officially recognized the child. He could only do so when he could show a document proving that the mother consented in the recognition. The recognition was a voluntary act on the part of the begetter of an illegitimate child, creating legal ties between him and the child. The father acknowledged his paternity, thereby admitting his obligation to provide for the child. The child received its father's last name and could then inherit from him, albeit only a third of what it would received if legitimate.

Only 'natural' children could be recognized, that is, children whose parents were both unmarried. Children begotten in incestuous of adulterous relationships could not be recognized. Until 1947 children could, in principle, be recognized only by their biological father. However, it is likely that illegitimate children were often recognized by a new partner of the mother, in this way adopting the child. 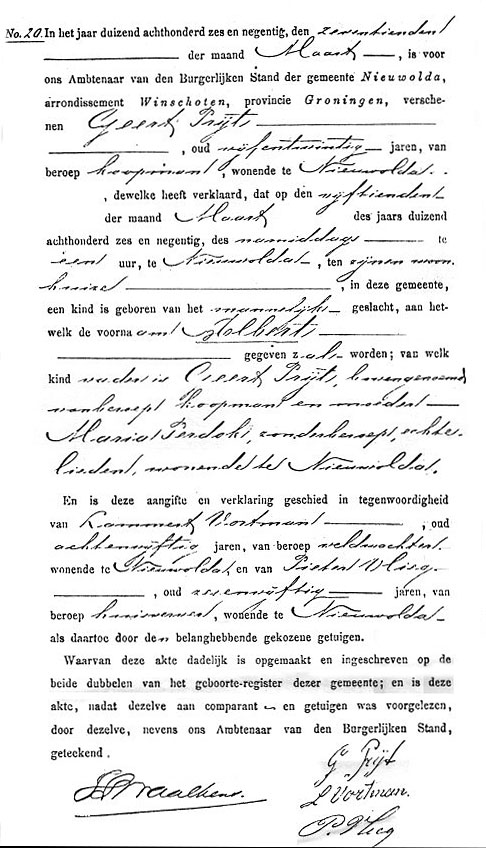