Data on a marriage certificate

Of all civil registers marriage certificates are the richest in the variety of information they contain. Not only is detailed information given on the bride and the bridegroom, but also on their parents - and sometimes even on grandparents or guardians - and at least two witnesses. The required public notices of intended marriages furnish information on former places of residence. The numerous appendices to the certificates range from an assent from the military commander to a certificate proving the couple's insolvency and therefore their exemption from marriage fees. Finally, an eventual divorce is indicated by a note in the margin of the marriage certificate.

Information on a great number of people is recorded in the marriage certificates. We find the Christian and surnames of bride and bridegroom, their ages, occupations and municipality of residence. It is also specified whether they had reached the age of majority or not. Until 1970 the certificates gave the names of former marriage partners as well, and, particularly in older certificates, included the reason for marriage dissolution. Further, the names, ages, occupations and municipality of residence of living parents are given or only the names of already deceased parents. When both parents had died, consent to the marriage had to be given by the grandparents or, when they had died as well, by the guardian and the joint guardian.

For the wedding ceremony at least four witnesses were required in the period 1811 to 1913. After 1913 only two were required, with a maximum of four. When, for some special reason, the wedding was not celebrated at the town hall, six witnesses were needed. For the witnesses, names, ages, occupations and municipalities of residence were given. Also the family relationships between the witnesses and the bride or groom had to be clarified, with acquaintanceship also recorded as such until the second half of the 19th century. Frequently marriage certificates record the intention of a couple to recognize one or more children, whose names, dates, and municipalities of birth are given as well.

Needless to say, people were only allowed one marriage at a time. They were not allowed to marry relatives in the ascending or descending line, which applied to in-laws as well. This means that, for instance, one could not marry one's cousin or even second cousin, and a widow could not marry her brother-in-law, at least not without special dispensation. Finally, until 1922, one was not allowed to remarry a partner from whom one had been divorced. After that only one such 'marriage of reparation' was allowed.

Perhaps more important than the legal minimum age was the required consent to the wedding, which had to be given by the parents and which was to be noted on the certificate. A distinction was made between persons who had come of age and those who had not. The Dutch Civil Law of 1838 stated that persons who had come of age (23 years) had to ask permission to marry until their 30th birthday. A refusal by one or both sets of parents led to a case before the cantonal judge. If they still persisted in their refusal, the wedding could not take place before three months after the hearing. People younger than 23 always needed their parents' consent. If both parents had died, the grandfather on the father's side was consulted; in his absence, the grandfather on the mother's side, and so on. When all grandparents were deceased, consent of the guardian and co-guardian was required. An illegitimate child needed the consent of its mother, and of its father as well, when he had recognized it. In the French Civil Code, which was valid in the Netherlands until 1838, one always had to ask permission from one's parents or grandparents, but for men older than 25 and women older than 21, refusal only led to postponement of the wedding. Instead of guardians, 'family councils' were to be consulted. After 1970 consent of the parents was only required in the case of minors and those under legal restraint.

Proceedings
In order to be sure that no illegal marriages were contracted, intended marriages had to be proclaimed publicly on two Sundays following the couple's giving notice of their proposed marriage. This was done by reading the proclamation aloud in front of the town hall. After 1913 an excerpt was posted at the town hall. The proclamations had to be made in the municipality of residence of bride and bridegroom respectivelyand in those where they had resided fewer than six months before. Until 1970 the dates and places of these proclamations were recorded in the registers.

Appendices
The appendices to the marriage registers contain a great number of documents needed to celebrate a marriage. First of all, the couple had to provide excerpts from their birth certificates because the registrars needed proof of the correct names and ages. In the first decades of civil registration, certificates of baptism or circumcision replaced the required birth certificates. When these were absent, e.g. in the case of Baptists, special certificates had to be drawn up stating that the births of these persons were well-known. Further, extracts from the death certificates of deceased parents, grandparents, or precious spouces had to be submitted. When the couple wanted to recognize a child, an extract of its birth certificate needed to be supplied. Finally, the appendices contain proof that the proclamations had been made, a document from either a military commander or the governor of the province stating that the groom had fulfilled his conscription obligation, a document stating that the couple was unable to pay the marriage fees, etc. All these appendices, which were not copied in the certificate, are kept in special registers. In the 19th century the various certificates in the appendices were generally listed in the marriage certificate itself, despite the law's not requiring this. 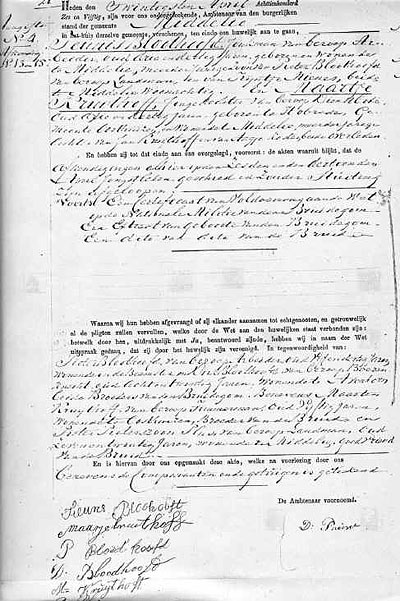