The union, founded in 1894, was a role model for the development of the trade union movement throughout the twentieth century: the organizational structures of today’s unions derive from these, the first “modern” trade unions.

*** Help to transcribe the ANDB membership cards and join our crowdsourcing project at the VeleHanden website.***

The ANDB was extremely successful in promoting solidarity between its members (men and women; Jews and non-Jews; highly skilled, well-paid cleavers and the lowly educated diamond-adjuster apprentices working on piece rates).
As well as securing a number of spectacular successes, including higher wages, the introduction of an eight-hour working day, and paid holidays, the union did much to promote an awareness and love of art and culture among its members.

The ANDB was very active in the Universal Alliance of Diamond Workers in campaigning to improve the position of diamond workers and to unify rates, its aim being to prevent the industry from abandoning its traditional base and relocating to low-wage countries.

The IISH is currently digitizing the ANDB’s archive. This is expected to be completed soon, after which the IISH will develop a series of activities to raise awareness of the ANDB’s archive and history, culminating in 2019, the 125th anniversary of the ANDB.
Telling the ANDB’s history to a larger audience will contribute to a better understanding of the historical development of the relationship between worker and employer, and so encourage reflection on the status today of a large part of our working population and how that can be improved.

To reach as many people as possible, the IISH aims to set up a number of projects targeting different audiences. All the projects will be based on the digital archive.

Provided that vital subsidies are indeed granted, we are considering the following activities:

The project is being supported by a Board of Patrons comprising: 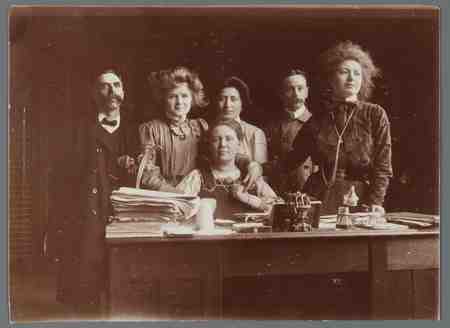